A look at some of the terms from Spain that have become lingua franca over the centuries. 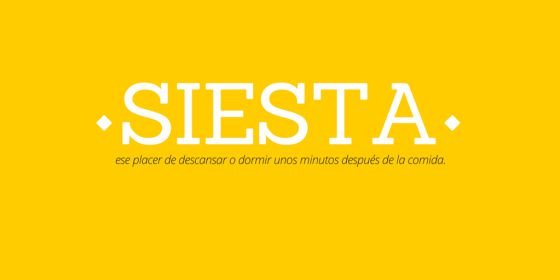 “Siesta: That pleasure of resting or sleeping for a few minutes after lunch.”

Most Spaniards probably think their language has a trade imbalance, importing more words than it exports, but that hasn’t always been the case. The accidental arrival of Columbus in the Americas and the Golden Age of the arts that followed saw Spanish words travel around the world, taking root throughout Europe. In those days, Spain’s was a dominant culture, setting trends.

For example, the fact that Spanish words such as armada and chocolate are found in languages such as English, Hungarian and German is a reflection of two types of natural language processes. Alberto Bustos, a linguist and author of a Spanish-language blog called Blog de Lengua, explains that “anybody who invents something, invents the word that describes it” and also that “language can help a culture adapt to realities that are foreign to it.”

If the smartphone is conceived in an English-speaking area, that’s the term most of the planet will use

What’s more, says Bustos, Latin is one of the main reasons that different languages share expressions we think are our own. “In this case it wouldn’t so much be a Spanish contribution, as much as a derivation or appropriation of Latin terms.” If you have ever come across an international publication referring to a president’s agenda or the calling of a referendum, that’s why.

“When two languages come into contact,” says the expert, “they tend to influence each other, but the exchange isn’t on the same terms.” Other factors come into play, such as culture, economics, and politics. That explains why English is the language that today “lends” more words to others, and Spanish can barely manage a few now and then. If the smartphone is conceived and advertised in an English-speaking area, that’s the term that most of the planet is going to use. Similarly, if Spain is known around the world for the variety of its cuisine or its traditional culture, it should come as no surprise that words related to these travel abroad and are picked up by foreigners. Geographic proximity, migration and tourism will do the rest.

These foreign words that retain their original spelling are known as loanwords. Below is a selection that Spanish has contributed to the English lexicon.

1. Corralito. This is when a government decides to close the banks and prevent people from withdrawing money – as is currently happening in Greece. The word was first coined in 2001 in Argentina by journalist Antonio Laje to describe the country’s financial crisis. The noun’s original meaning refers to a public playground that has been closed off to stop children from escaping. In turn, it comes from ‘corral,’ a Spanish word that entered English via the United States, as a pen or enclosure for animals.

2. Mosquito. The insect that kills more people around the world than any other. In Spanish it means “little fly.” National Geographic tells us that its activity increases five-hundredfold during the lunar phase.

3. Guerrilla. Che Guevara was arguably the best-known exponent of this military strategy, which in Spanish means “little war.” The idea is that small, dispersed groups attack and harass the enemy. The word entered the language during the Peninsular War against Napoleon. The success of the campaign against the French led to the term being applied to fighters, as well as the form of combat itself.

4. Macho. The qualities traditionally associated with masculinity. The term was famously used by US disco group Village People on their hit record Macho Man.

Leaving siestas and fiestas aside, ‘tapas’ has arguably most come to identify Spain in the minds (and stomachs) of foreigners

5. Daiquiri. A cocktail made with lemon juice, white rum and sugar. The name comes from a neighborhood in the Cuban town of El Caney where a US-owned iron mine was located. Visiting Americans picked up on the delicious drink, making it world famous.

6. Peón. This Spanish word is used in English and other languages to refer to a day laborer. To a lesser extent, it is also used to describe low-ranking infantry soldiers. It originally comes from the Latin word pedo, which has nothing to do with the modern Spanish significance of the term, which means ‘fart.’

7. Siesta. Spain is still sometimes disparagingly referred to as the land of the afternoon nap, but the tradition is also popular in many other countries. Winston Churchill adopted the habit after visiting Cuba during the country’s fight for independence from Spain.

8. Cafetería. Used throughout the world to describe anything from a coffee room to a restaurant, and now, of course, also a place to find a free WiFi connection.

9. Fiesta. That magical moment when a group of friends gets together to celebrate. The reasons can be many and varied. Foreigners love to say the word, and like siesta, it has become inextricably linked to Spain, thanks in large part to fiestas such as San Fermín and the Tomatina in Buñol.

In past times, explorers, adventurers and writers scoured the Earth seeking out the wonders of the world. Today, we have the internet. VERNE: a thousand marvels a minute. Click here for more verne stories in English, and here for the Spanish page.

10. Cilantro. A sweet-smelling herb used in cooking, which supposedly also has medicinal properties. In some English-speaking countries it is also known as coriander, but in the United States particularly, cilantro is what you want in your guacamole, for example.

11. Embargo. Rooted in Latin, this term refers to ban on trade with another country. The United States has famously imposed one on Cuba for more than half a century.

12. Aficionado. An expert in or exponent of a sport or art form. Ernest Hemingway was a great bullfighting aficionado, for example.

13. Adobe. One of the many words to enter Spanish from Arabic, it refers to a crude mud and straw mix used to make bricks, and has long been a commonly used building material in Latin America. Today it may be more familiar as a brand of software, and was apparently chosen because one of the founders of the company lived near a place in California called Adobe.

14. Loco. All languages have their word to describe somebody or something that is mad or crazy, but this Spanish word has captured people’s imaginations around the world. Spain even has its mad queen, Juana la Loca. Argentinean soccer coach Marcelo Bielsa was dubbed “El Loco,” and there is also a town in Oklahoma of the same name.

15. El Dorado. Countless Spanish explorers disappeared while searching for the legendary city of gold hidden in the jungles of South America, among them Francisco de Orellana, who in the process became the first European to navigate the Amazon river. Several centuries later, Indiana Jones set off in pursuit of it, while Cadillac decided it was a great name for a car. As the place was never found, the term often has negative connotations.

16. Patio. In Spanish it means courtyard, while in English it has come to denote a small, paved garden, typical of suburban houses. Game of Thrones character Jaime Lannister was recently seen in the legendary Patio of the Maidens in Seville’s Alcázar palace.

17. Bodega. Originally a place where wine was stored, the term has also come to refer to mom-and-pop stores, particularly in the southwestern United States, as a result of the area’s proximity to Spanish-speaking countries and large migrant population.

18. Tapas. Leaving siestas and fiestas aside, this word has arguably most come to identify Spain in the minds (and stomachs) of foreigners. The origin is disputed, with some linguists saying it comes from the practice of serving a drink with a piece of bread or plate on top of it to cover, or tapar, the glass. Granada’s bars have established a reputation as being among Spain’s most generous in providing tapas with their drinks.

19. Matador. The romantic, or macho Spanish male par excellence, and a figure that has long captured the imagination of foreigners. Ernest Hemingway, that bullfighting aficionado, immortalized two of Spain’s best-known matadors, Luis Miguel Dominguín and Antonio Ordóñez, in his posthumously published book The Dangerous Summer.

* If you don’t know what the word ‘guiri’ means, chances are you are one…

Los dobles sentidos… y nunca mejor dicho
The rise and fall of “Gary” – From Royal Moniker to Threat of Extinction
You Need to Speak Emoji to Understand This Anti-Drug Campaign
¿Por qué “mojamos el churro”?
Creating a language made up of nothing but emoji